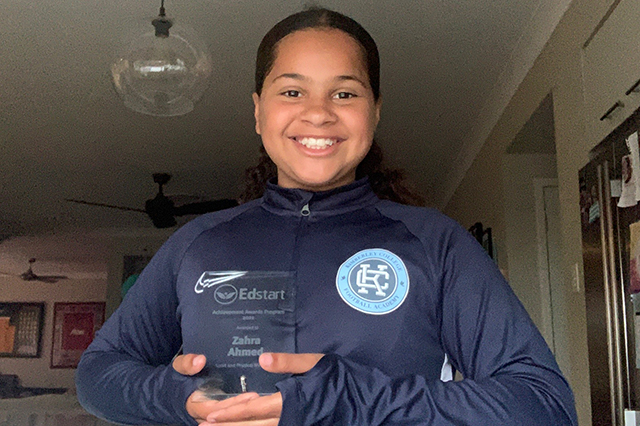 Year 5 student Zahra Ahmed from Kimberley College in Queensland has been making waves in the soccer world since she started playing ‘Squirts’ as a 4 year old. She’s shown talent from the very beginning and in her first ‘Miniroos’ match, she made her mark by scoring 4 goals.
Zahra is our Edstart Achievement Award winner in the Sport and Physical Wellbeing category this year. Not only is she passionate about the sport, she’s also committed to helping others and has developed an initiative to get more girls involved in the game.

On a path to success

A keen Manchester United supporter, Zahra developed her passion for soccer (or football) from her dad who was active in the sport as a kid in Tanzania and was the team captain at his university in Malaysia.
Over the years, she has been invited to her school’s Soccer Academy, taken part in the Skills Acquisition Program at Logan Lightning FC, invited to join the Tom Kenny Football Academy, and secured a spot in the Brisbane Roar Talent ID program for U10/11s where she was the only girl among 40 boys at the trial.
This year, Zahra was selected to represent the South Coast Region in the QLD State Championships, and is one of the youngest players in the team. She aspires to play soccer at the elite level and represent Australia as part of the Matildas - our women's national team. 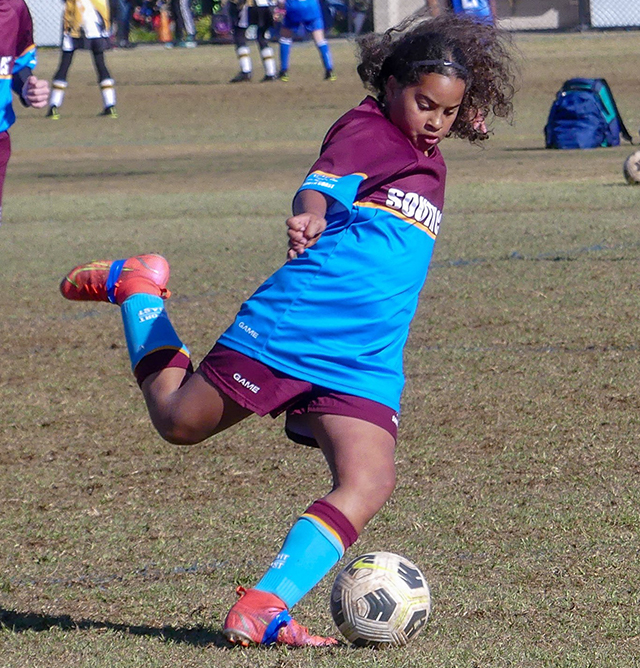 Zahra’s passion for soccer has also driven her to make an impact off the field. She has developed ‘Soccer Sisters Unite’, an initiative to help young female soccer players overcome the barrier of cost to participation.
The idea for the initiative was sparked by one of the players in her team, Amara, who is an amazing player but unable to access extra skills training due to cost constraints. Zahra realised that not everyone is as fortunate and wanted to help players like Amara further develop their talent in the sport.
While soccer is one of the most popular female sports in the country, the costs of registration, uniforms, travel and equipment can quickly add up. It means specialist skills sessions, school holiday clinics and events are out of reach for some players due to the additional costs involved.

Since receiving her $1,500 awards grant from Edstart, ‘Soccer Sisters Unite’ has already funded a 2-day school holiday clinic for one player and is on the lookout to help others.
Zahra has been working with her coaches and local club to identify the best programs for players to participate in. She’s also managed to negotiate discounted rates with private soccer coaches so that her initiative can help as many players as possible.
We’re extremely inspired by Zahra and are excited to continue tracking her progress. We look forward to cheering her on in the future as she reaches her goal of playing with the Matildas at the Football World Cup and the Olympics.
Nominations are open
Nominate now for the 2022 Edstart Achievement Awards Program.