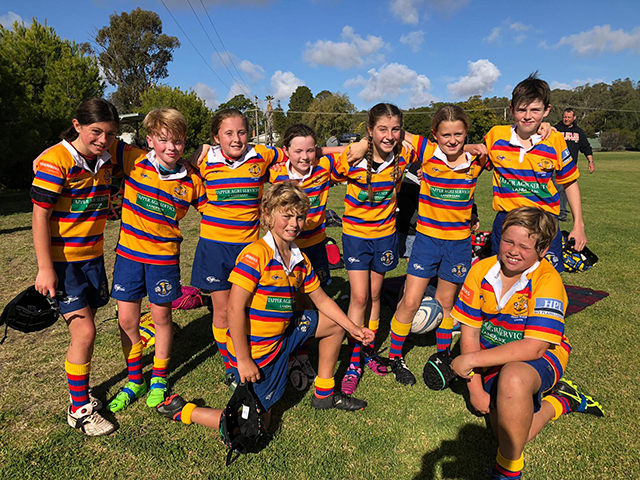 For Grace McLean and her team at the Hay Cutters Rugby Club, rugby is more than just a weekend sport. They all travel at least 10,000km every rugby season, often leaving their homes on a Saturday to make games on Sunday due to the distances.
The rugby club was founded by some dedicated rugby fanatics in the heartland of AFL country. It was initially just one team of senior male players travelling all over NSW to have a run on the paddock and celebration with the opposition at the end of the game.
It’s a club that has forged lifelong friendships, quite a few marriages and a whole lot of children. Faced with a growing band of restless junior rugby fans, they decided to start the Hay Whipper Snippers in 2015 and Grace’s rugby career began the following year as part of the mighty Under 8’s.

Grace is one of the successful recipients of the Edstart Junior Rugby Scholarship Program, which was launched earlier this year to help support the game at the grassroots level and develop future rugby talent in NSW. As part of the scholarship, Edstart will fund the registration cost for participating in the 2020 season as well as equipment costs such as boots and mouth guard.
Rugby has been an incredibly important part of the McLean family’s ability to deal with the drought. It is something they all look forward to and is a great excuse for everyone to get together and forget about dust, drought and stress for a while.
Grace’s mother, Alison McLean, says her daughter has never had a new pair of footy boots and is excited about getting her own pair thanks to the Edstart scholarship. The club has a giant bag of hand-me-down boots that they take to the beginning of each season and each player finds a pair to wear for the season. 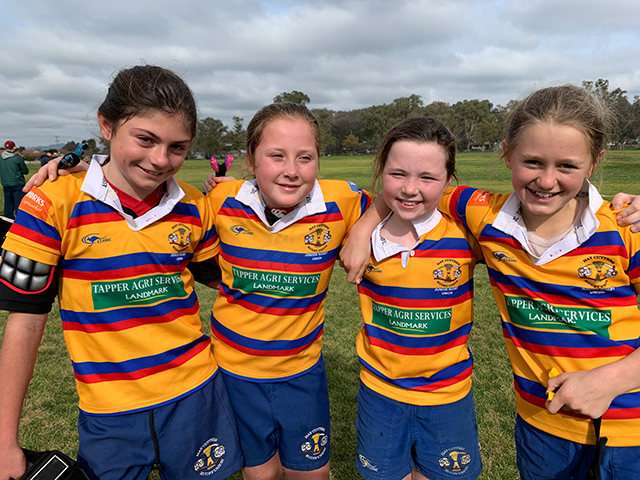 Huge response to our Scholarship Program

The scholarship program has had a huge response with hundreds of applications from across the state. The process of narrowing down such a large applicant pool has been challenging with so many worthy applicants.
We’ve assessed applications based on a range of criteria, from recognising the child’s passion and achievements in rugby, supporting kids where rugby is beneficial for their development and wellbeing, to assisting families that have been through difficult situations including the bushfires, drought and domestic violence.

Izaac loves playing rugby and loves being among team sports. In his first season, he scored 72 plus tries for his team and he spends copious hours watching YouTube videos to improve his game.

“When anyone asks me what I want to do when I grow up, I always say, “be a Wallaby and play for Australia”. Even my teachers at school know this is my only ambition. I’m in Year 4 now and I keep dreaming of getting a high school scholarship for Rugby Union to one of the really good Rugby Union schools in NSW. I’m going to keep working really hard this season because it’s only two years until I try out for high school,”

“This scholarship from Edstart means so much to me. It really encourages me to believe in myself and dream big. I was so excited when mum told me I got a scholarship for Rugby. Thank you Edstart for believing in me.” - Izaac

Kelly is the only female player to ever play over 50 games for Clovelly Rugby. She has been the only girl on the team for years and this is the same on her school team at Bronte. She loves rugby and wants to play for the Waratahs one day. She was selected to the Randwick Rugby development squad over the summer and was recognised by her club with a new award for female achievement.

“I started playing Rugby when I was 5. Dad says I was bored sitting on the sideline watching my older brother and he gave in when I kept asking to go on. I have lots of fun and I like being able to tackle the boys and throw them over the sideline. It's better than touch footy as I can run as hard as I can and not have to stop unless they tackle me and force me to stop. I play 2nd row and winger which is a bit weird but both positions get to do a lot of rucking and pushing which is fun.”

“In the future I want to keep playing Rugby like the Super W girls and Wallaroos if I’m good enough and play for Randwick in between. I like that my brother will come with me to watch the Waratahs girls play now and even stand on the sideline at my games too.” - Kelly 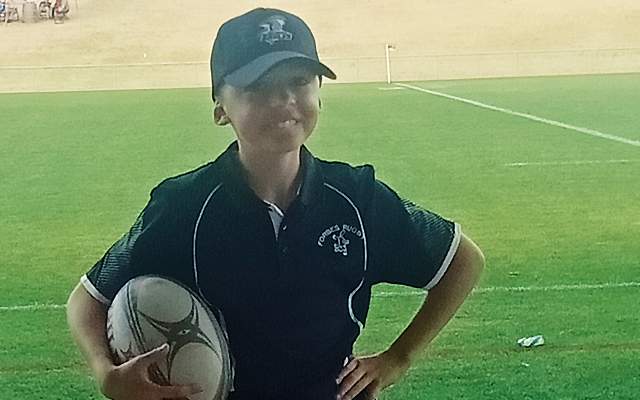 Lochie has come out of his shell since starting to play rugby and he can't wait for the 2020 season to start. He is an excellent athlete and runner and has been to regional athletics for all track events including 100m, 200m, 800m 1500m and the 4x100m relay. He has also received the Aboriginal Encouragement Award two years in a row.

“Lochie is on the countdown to the 2020 rugby season. He can't wait to get out and train with the boys. Moving up into under 14s, Lochie will be one of the smallest kids on the field but it won't stop him those little legs move fast. He loves the mateship of the game from not only the boys in his age group but the older ones too who have taken him under their wing as he starts Year 7 this year.” - Cami, Lochie’s mum 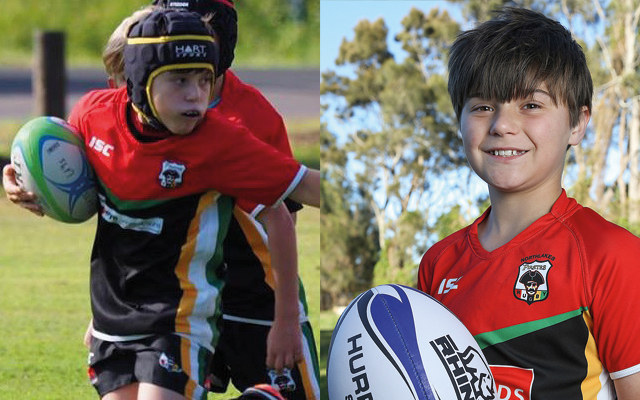 William has played rugby for 7 seasons and wishes to further develop his skills playing at the base of the scrum as he enters his next phase of junior rugby. He wishes to go on to play through high school then at the senior level for Sydney University. His family is relocating to Sydney this year where he’ll be joining Hunters Hills Junior Rugby.

“I like how rugby is not one core element but there are many facets to the game both in attack and defence. I also like bonding with my teammates and playing as a team. I like to tackle and I love cleaning out at the breakdown. I want to play high school rugby, preferably in the GPS comp and then play grade for a Shute Shield team while attending uni to become an Astrophysicist. My ambition is to make it into the Super Rugby competition.”

“The Edstart scholarship feels like I’ve gotten noticed and I am one step closer to achieving my dreams. For mum it helps her financially and makes her very proud of me.” - William Olivia played her first game of rugby for Macquarie Anglican Grammar School early in 2019 and the team went onto the state titles in Newcastle in September. She then trialled for Central West U15's where the team played at the state titles in Forester where. Olivia was named Best & Fairest for her team.

She absolutely loved the game and has shown huge potential in her first year of playing. She can’t wait to learn more and improve her skills further. 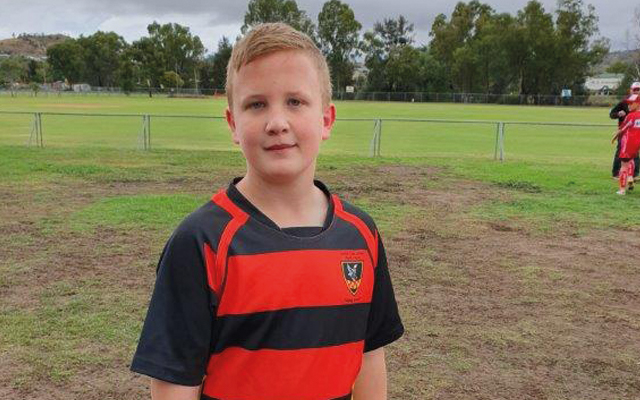 Samuel was quite timid and quiet prior to playing rugby and through being involved with a team as well as having great mentors and role models, he has slowly gained confidence and developed a passion for the game.

For the family, rugby has helped them through difficult times and form lifelong friendships with people from all walks of life. Samuel initially played for Warnervale but is looking to join Lindfield this year to further learn and develop as a player. 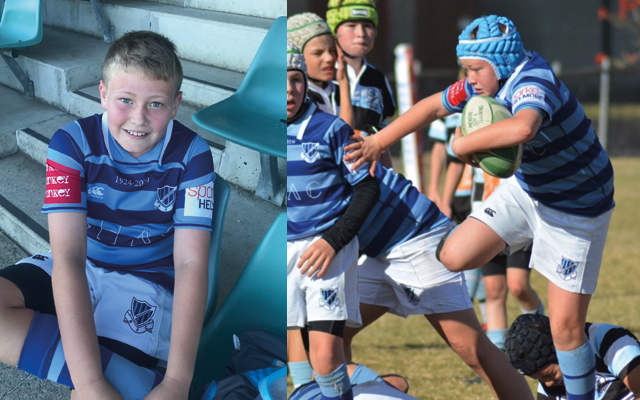 Luke has a strong passion for Rugby Union and has been working hard to get better every year. This year he is as motivated as ever to progress further and work towards being selected into the Country Development Squad. He has trained all through the school holidays to ensure he is ready for the 2020 season and to be the best he can be.

Rugby is where he has made the most friendships and having moved around to 4 different schools and Rugby Clubs, his commitment to Rugby never falters as it is where he finds the most joy. Over the years, Luke has received the coaches award twice (U8) Coffs Harbour & (U10) Lake Macquarie, Best Forward (U11) Wanderers and selected in the Hunter Junior Wildfire representative team (U11) and the New England Lions representative team (U12).

“Throughout the past two years, our family has undergone some trying times and it has meant that Luke had to step up and assist around the home. During this time he never let his studies or training fall behind and never complained about the changes to our lives. It's wonderful to receive a scholarship such as this to be able to buy him new gear to set him up for success for the 2020 season.” - Kirsten, Luke’s mum 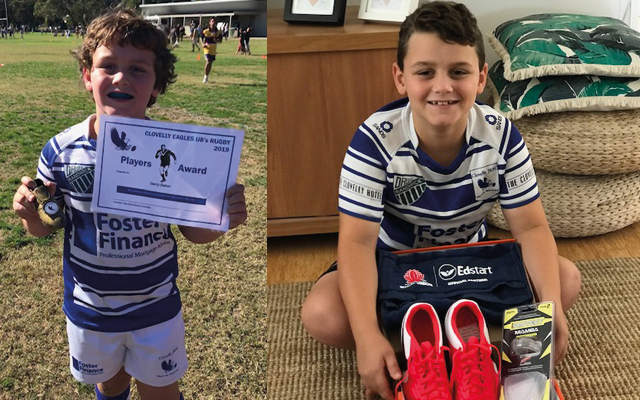 Darcy lives and breathes rugby and has aspirations of playing rugby professionally. His family is involved with the Clovelly Eagles where Darcy is also a coach.

“I love Rugby because my Dad coaches me, I love tackling and scoring tries. I have made so many new friends from playing rugby.” - Darcy 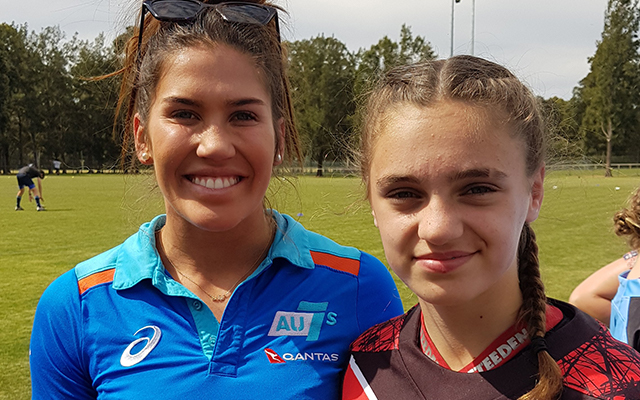 Grace played Rugby 7s for the first time last year in primary school and fell in love with playing the game. She enjoys the fast pace, and of course scoring tries.

As a proud aboriginal girl, she also loves learning her culture and being very active in this area at school. She absolutely loves her sport and strives to do her best academically. 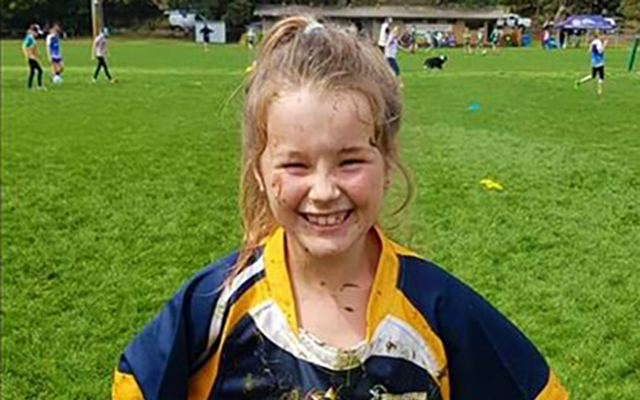 Mackenzie has Type 1 diabetes, loves the sport and is determined to not let her diabetes stop her playing. Her proudest achievement is scoring a try and playing for her school. Her goal is to represent Australia one day in rugby.

“I feel lucky to be selected and hope that one day I will get to play for Australia and prove all the boys wrong - that a girl with Type 1 diabetes can do anything especially play rugby.” - Kenzie

Edstart is glad to be able to support these families and we look forward to tracking their progress during the 2020 season.

Edstart makes it easy for you to manage education costs by providing flexible payment plans you can control. We can help you spread large upfront school fees into more manageable payments, so that school fees don’t hold back your family’s finances.

To see how we can help with you, visit our main website.