One young changemaker on a mission to help women in Tonga When Evalani Pouli was 8 years old she travelled to Tonga with her family to stay in the village of Talafo'ou where her dad grew up. While Tonga is home to pristine beaches and lush rainforests, Evalani was surprised by the differences in living conditions compared to what she was used to here in Australia.
The small village of less than 400 people had basic outdoor showers with a hose, families of more than 10 were sharing one bathroom, and there was a lack of access to essential resources including sanitary products, basic medical products and cleaning products.
Eight years on this memory has still stuck with Evalani and the now 16 year old from Stella Maris College has developed a project to improve access to sanitary products for women and girls in the community, which led her to winning this year’s Edstart Achievement Award in the Social Impact category.

Passionate about helping others

Growing up Evalani was particularly influenced by her mum’s involvement at Stewart House, a place providing children with optometric, dental and medical treatment as well as emotional support. It was during this time Evalani realised not everyone had the same privileges or access to opportunities as herself and her friends, which ignited her passion for helping others.
Since then she’s been active in her school community, organising a bottle recycling program, packing Christmas hampers for Vinnies, sending paintings to children in developing countries and receiving the Junior Benedictine Award for her social justice efforts, chosen out of 600 students.
For the past 5 years Evalani has also made care packs for womens’ shelters in Manly and started a bottle collection service in her neighbourhood, donating money she raises to projects that inspire her.

This year Evalani started The Talafo'ou Project to support women, especially youth within the community, by providing a more hygienic and convenient way for them to deal with their periods.
Menstruation is not a topic that is openly discussed in Tongan culture, meaning girls don’t have enough information or understanding about the topic and can’t openly talk about the challenges they face.
Her initiative is centred on supplying sanitary packs to the community with focus on providing period underwear that can be washed, reused and last for up to 2 years. It’s important that the products are reusable and sustainable as effective rubbish disposal is another issue in Tonga.

After receiving her $1,500 awards grant from Edstart, Evalani kickstarted her project and has already been flooded with support, from Bonds providing 100 pairs of period underwear to members of the local community offering to donate items.
She’s also been featured in several local newspapers in the Northern Beaches recognising her efforts and for receiving the award from Edstart. 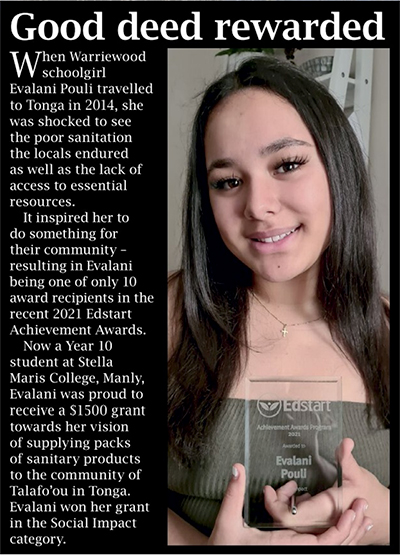 Evalani’s focus over the next few months is to collect as many pairs of period underwear, and translate the use and care instructions to Tongan to ensure the products are used properly.
In the long term, Evalani hopes to distribute these packs to other villages as well as the Women and Children Crisis Centre in Tonga who provide counselling, refuge and shelter for women and families escaping domestic violence.

Edstart makes it easy for you to manage education costs by providing flexible payment plans you can control. We can help you spread large upfront school fees into more manageable payments, so that school fees don’t hold back your finances.