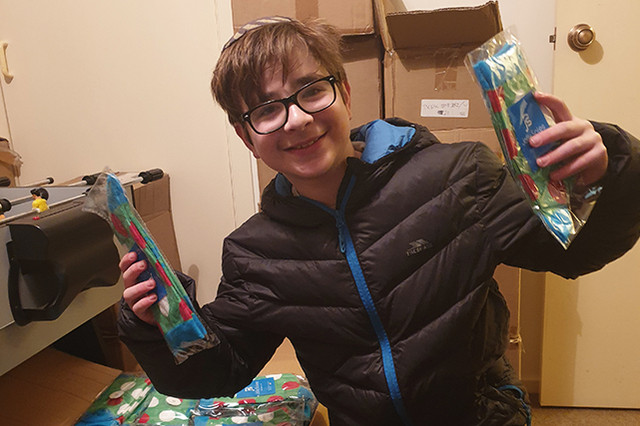 Benjy Orwin and his family were walking home on a winter evening and despite wearing beanies and jackets, it still wasn’t enough to combat the piercing cold. Concerned by those less fortunate than himself, the Leibler Yavneh College student worried about how vulnerable people on the streets manage during the chillier months.
When Benjy’s mother told him, “there aren’t many people who try and help,” Benjy was determined to serve and support others. For the past four years, Benjy, winner of the 2021 Edstart Achievement Award, has been changing lives one sock at a time.

When 12-year-old Benjy isn’t playing computer games or learning different martial arts moves, he’s busy running his charity Socks4Support . Socks may not be a luxury to most of us, but Benjy felt that one of the most simple clothing items could provide warmth and comfort to those in need.
Benjy spoke at his school assembly to encourage donations and convinced local supermarkets to set up collection bins. He could tell that people were doubtful, but socks started coming in.
Since the inception of Socks4Support Benjy has consistently outperformed his yearly targets, and collected over 25,000 pairs of socks distributing them to charities in Australia and overseas. In 2021, they donated 800 pairs of socks to the storm-affected Dandenong ranges and more recently over 1000 pairs were given away to people struggling with homelessness over the festive season.

Socks4Support has continued to expand as Benjy has received assistance and donations from a supportive community of businesses, groups, and individuals, including two letters from the royal family! From speaking on the radio, being on television, to featuring in the newspaper, he is making a positive impact as he spreads the word about his charity.

Winning the Edstart Achievement Award has given Benjy an incredible boost of confidence. The recognition provided by the award has signified that he is doing an important thing for the community.
He hopes to use the $1,500 grant to travel across the country and overseas to continue spreading awareness and promoting Socks4Support.
Through Benjy’s eyes, age is no barrier to making a difference in people's lives. This is just the beginning for the young student, and we are excited to see him continue helping those in need for years to come.
Nominations are open
Nominate now for the 2022 Edstart Achievement Awards Program.